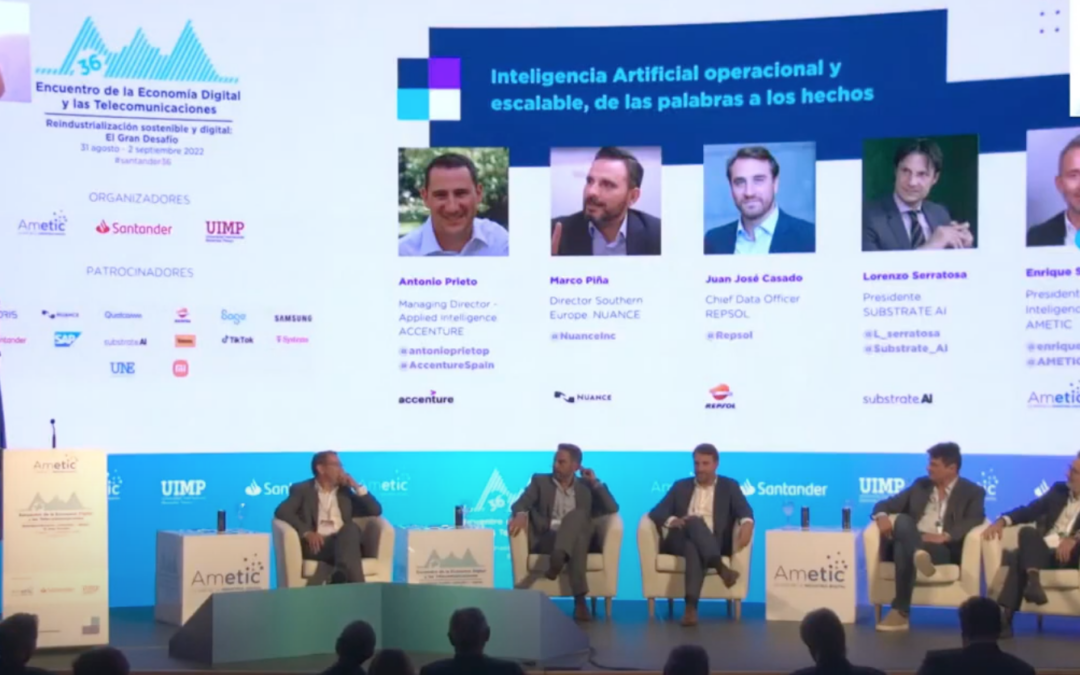 On the occasion of the 36th AMETIC's Digital Economy and Telecommunications Meeting, Substrate AI participated in the round table discussion on the Operational and scalable Artificial Intelligence. It took place in Santander and after the presentation of Carme Artigas and her speech about digitalization.

It was Lorenzo Serratosa, president of Substrate AI, who participated in the round table together with other active members of the AMETIC commission such as Antonio Prieto, Managing Director of Applied Intelligence at Accenture, Marco Piña, Director Southern Europe at Nuance and Juan José Casado, Chief Data Officer at Repsol. As Enrique Serrano, president of AMETIC's Artificial Intelligence and Big Data Commission, called them, a table formed by the Rolling Stones of Artificial Intelligence.

Very optimistic about the future of Artificial Intelligence and aware of its long road ahead, there was a debate on its application in different industries and its implementation in their respective value chains. An implementation suitable for all chains, without exception.

The complex speed of Artificial Intelligence and its necessary accompaniment of a transversal and solid strategy was exposed on the table. The impact it produces as well as the return it generates, is really the starting point to consider for its development, since Artificial Intelligence should not be seen as a cost, but as a pure investment.

Lorenzo Serratosa, in his speech, spoke about the current and promising products that Substrate AI is developing around energy and health. Products with operational and scalability as the differentiating component.

On the one hand, RESPIRA, an intelligent ventilation control system, acts as a brain that manages all its "organs" as efficiently as possible. A work based on the reinforcement learning thus overcoming the seasonality of patterns and data and thus adapting to constant evolution and change. It is a Plug & Play system, flexible, scalable and quick to implement.

In the health sector, Substrate AI, in partnership with 4D Médica, is developing a more accurate self-diagnostic imaging model through the use of Artificial Intelligence. A model applicable to both animals and humans.

In the following video you can see the talk dedicated to Artificial Intelligence, and the contributions of the different speakers in this event.